Mama made a mustake (as in mistake, as in I have erred)

There are few things that 3 year old enjoys more than the mistakes I make. He LOLs, gloats and analyzes them eventually passing a final verdict classifying them as either a bad mustake or a silly mustake. He uses the same terms to describe his own actions only his mustakes are nowhere near as outrageous as mine. Here is a sample of some bad mustakes without mentioning any names: spilling hot chocolate on the sofa, sucker punching one’s mom and peeing on the floor/into the bath when you’re not in it and basically any type of intentional non accidental peeing not into a potty or a toilet. Here is a sample of a silly mustake: calling 10 week old 3 year old. Last week I made a silly mustake.

Remember how in my last post I’d mentioned that I had a falling out with junior? It had to do with him depriving me of sleep. After a rejuvenating total of 3 hours, I woke up at 3am and decided to do something about 10 week old’s social life. As you may recall he resides in his Baby Bjorn and has none. For fun he’ll lie down in his playpen wiggling to the flashing lights and music of his Baby Einstein music device . Very often he’ll  shout with ecstasy while thrusting his legs and arms up in the air. Go figure.

Alternatively he stares at the big flowers painting on our living room wall, which in 10 week old’s eyes is even better than the music thingy because for one thing the big flowers never once made him cry. I look at him and think, come on, man, you should want more for yourself in life! Like to lie down on a mattress somewhere else and listen to me sing zoom zoom zoom! Not participating in any classes for the past 10 weeks is a terrible mustake and I’m going to fix it, even if I fall asleep doing so!

So I sleep-registered for a baby class.

Side note and confession:  3 year old used to go to Gymboree from the tender age of 6 weeks. I remember walking in, examining a flyer that said ages 0-6 months and asking the Receptionist if it was too late for him. What an amateur. Then I did the exact same thing last week only it was not at Gymboree. So NOT Gymboree that it’s not even funny.  See, the reason 10 week old was not in classes up to that point is that I’ve been paralyzed by the need to find a Gymboree replacement, because what could be that good? I would have totally signed up 10 week old if it hadn’t been for that sign on Gymboree’s door informing parents that their lease is up and explaining how convenient it would be for me to now access their new location by 2 buses and 2 subway changes. So for poor 10 week old I had to go for the second best option, the outdated, somebody’s DIY basement from the 70’s-vibe facility, which will remain nameless, suffice it to say that all the toys there  look slightly chewed up and as though they’ve been rescued from under water.

Back to sleep registering. That act resulted in not remembering later whether I paid and exactly how much, not being exactly sure as well of the time class starts and not exactly knowing what do the kiddies do in this class anyway. For all I knew it could be underwater diving and toy rescuing. On our way to the nameless 70’s basementy baby class at 2:30 a suspicion snuck into my heart. Why did I glance at the flyer listing the class times so quickly? After all mama’s been known to make a silly mustake or two in the past. As we approached the building the same flyer was on display outside and I’ve noticed there was a 2-6 months old class that started at 1:15pm and it looked alarmingly familiar, however upon walking in we were greeted by a friendly Receptionist who reassuringly asked “are you here for the class?” Thank god and yes thank you. Let 10 week old’s social life begin!  To make a predictable story short, 10 week old is looking very uncomfortable and a little shocked, the vast room is looking very uninviting with lots of age inappropriate toys spread on the floor, and the Teacher and Receptionist, who is also the Manager I think, very politely inquire if we are actually here for the 1:15pm? Because when we arrived the participant was in a carrier (uhhm) and now that he is out he looks kind of small for 7 months but with all that hair they thought when we walked in that maybe he’s just a really petit 7 month old with awesome hair. Nope. Mama made a mustake and let’s hope they don’t kick us out of this club we would never want to belong to, kiddo. The employees are super nice and they let us stay. When the class starts suspicious 10 week is being introduced to the giant babies as An Observer. He takes his role seriously looking more important than usual. When the initial portion of the class is over and the giant babies are off to continue developing in other corners of the room,  10 week old and I sit down by some musical instrument toys. My initial plan to demonstrate to 10 week old how a drum sounds is countered by one of the giant babies who is thoroughly chewing on one of the drum sticks (I knew it!!!) so I decide to concentrate on a demure little used-to-be-purple plastic bell. For the duration of the class I am sitting there, ringing this bell, determined to get my money’s worth and make the most out of this experience for 10 week old. And you know what, it’s working, dammit. Instead of looking hostile and terrified he is slowly falling asleep, still making sure to maintain the Observer’s facial expression just in case. Things really take a positive turn and soar when we sing Rolly Polly and 10 week old wakes up and he is like, yeah, now this is what I’m talking about! I told you there was more to life, my son, than the portable light music Baby Einstein thing! And then class ended. I can’t wait to see what songs we sing next week. 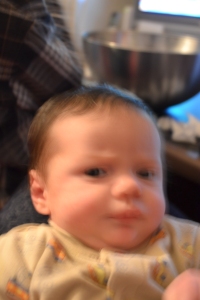 When I was putting 3 year old down to sleep that night my bedtime story was about mama’s silly mustake. He didn’t get it. Guess telling him was another silly mustake.

Halloween Special – The Scary Chairs and the Scary Couches and the Scary Vampires – As told by 3 Year Old »
« Hanging out with 9 week old – A Reassuring note to expecting moms. Yes, your newborn can possess a personality!