I blog for many reasons. Too many to name. Chief amongst them is that it brings me closest to my true self, a nearly extinct relationship that I cherish and crave.

Sometimes when 4 Year Old, Master of Emotional Extortion that he is, wants to fish for sympathy after doing something he shouldn’t have, he uses this catch phrase “I guess I should go and stay in somebody else’s home”. I’ve never realized until now that this has been my emotional reality for the better part of the last six years, which I’ve spent living “in somebody else’s skin”. While I am not sure that that entity was well defined enough to be wholeheartedly referred to as “somebody else” but it most certainly wasn’t me, since everything that defined me once had changed. 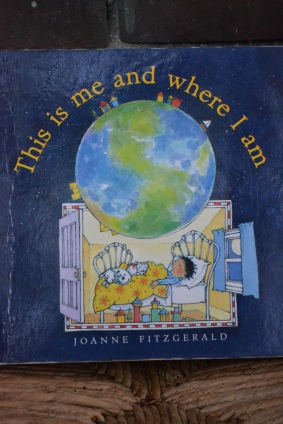 This is Me and Where I am – By Joanne Fitzgerald

This is a book that 4 Year Old got for his first birthday from my friend, Mary.

This book demonstrates the concept that we are all part of something larger, a Babushka-doll-like construction of concentric circles with us in the middle surrounded by our room, our house, street, neighbourhood, city, insert family where applicable and you get the picture. 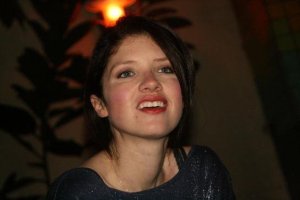 This was my family:

Then I moved to this country. After a while I ended up on this street: 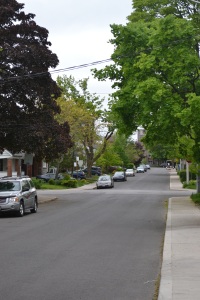 On the left side of this house:

This is now my family:

And I am a different Katia. Did you notice how everything got bigger once I moved? Well, I shrunk.

When I first moved I became a ghost, a neither here nor there type of being. I’d wake up at whatever time I did and immediately add 7 hours to the local time, so I could fine tune my biological watch and “correctly” place myself. For a few years I’d continue multiplying the prices of local products by four to get an idea of how much they’d cost in another, non-relevant reality. I’ve split into three, my authentic pre-immigration self, and two local beings: new immigrant Katia and Meta Katia, constantly hovering over the new immigrant one’s head, correcting her behaviours, criticizing and judging her for using the wrong English word, constantly assessing and updating the charts on her daily levels of fitting in. New immigrant me couldn’t just be, because it was ‘being’ in so many parallel, non babushka-doll-like, non overlapping circles and levels that I was no longer a monolithic coherent structure but a fragmented one. Now add new motherhood to the equation.

I could write a book with the various excuses I’ve come up with over the years for not writing. Chief amongst them in the last six years is that immigrant Katia can’t write in a language that is not her native one. Last summer 9 Month Old was born. Once he safely emerged into the world, two weeks ahead of time, part of me was probably ready to let go of fear and I started writing.

I blog because writing brought friends who think and feel like me into my life.

I blog because every post of mine that gets published on other websites is a triumph for new immigrant Katia.

I blog because every retweet of my posts from my accomplished blogger friends and from writers I look up to such as Marinka and Jeni Marinucci brings immigrant Katia another step closer to the authentic me.

Why do you blog?

This post has been a Finish the Sentence Friday contribution. Please visit our wonderful hosts:

Stephanie at Mommy, for Real

61 thoughts on “Closest to Me”