How Life With 4-Year-Old is Just Like Being in The Mob. I Would Imagine.

As you probably definitely maybe know I’m Jewish. But I’m going to need a confessional booth for this one. Forgive me father, I have sinned. I’ve never watched The Sopranos *lowers voice and gaze, shoulders drop* or The Godfather or *whispers* Jersey Shore. I did, however, watch both Analyze This and Analyze That, so I think it’s fair to say I have a pretty accurate understanding of how the mob operates.

When it comes to 4-year-olds, I think I have a fairly good grasp on how they operate as well. Remember when your baby was a newborn and was constantly feeding and whenever you told your husband, whose fault you knew this whole situation was but you weren’t exactly a 100% on how, that no, NO freaking way is he hungry again when he just finished eating a half an hour ago after being nursed for an hour and a half, and your husband smiled at you graciously and forgivingly (he probably also knew it was his fault) and said the magic words “growth spurt”? Well, babies are constantly growth-spurting. Trust me. Whenever you talk to a newborn’s parents they’ll tell you their baby is going through a growth spurt. After they’re done growth spurting the next thing they’ll want to do is practice different ways of yelling and throwing stuff at you and we give these different ways different names. First we call it ‘colic’ then ‘terrible twos’ then ‘he-didn’t-really-have-terrible-terrible-twos-so-he’s-like-compensating-for-that-now’. After, during and before the stages I’ve just mentioned, there’s the ever applicable ‘he’s just adjusting to The Changes’ and then there’s ‘four’. And sometimes, if you’re me, you’re stumped and then you turn to friends. ‘Was your yelling kid replaced with a louder and more often yelling kid?’ I was discussing this with a friend the other day and she introduced me to the term Effing Fours. I’ve never felt so understood. My life was making perfect sense again. There was a tremendous sense of relief that came with that. Oh, so it’s a thing you say, those fucking fooooours! Oh, I get it nooooow!

Our once cozy home has been transformed into a seedy mob hangout where sentences like “if you say no to my ques-ten I will throw this lego in your face” are being both said and backed up.

Here are a few other attributes of my life with Handsome Benny and Curly.

Threat issuance on both sides and bribery offers on one.

The surprising emergence of a Boss. 4 Year Old has been very preoccupied recently with the concept of “who’s in charge”. For a while he mistakenly thought that dad was boss but when met with the actual boss’s fury he realized the severity of his mistake. Not being a spring chicken when it comes to manipulation he immediately corrected himself: You’re boss, Daddy’s boss, I’m boss, 1 Year Old’s boss. We’re all bosses here! Heyyy! 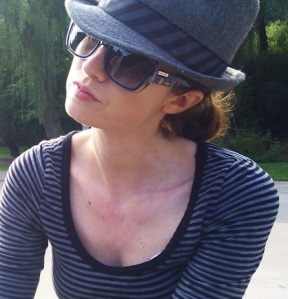 The boss catches herself making a flustered but passionate speech about her deserving some R-E-S-P-E-C-T (and finds out that not spitting into her eye is what it means to her).

Kicking, throwing things and coming up with creative forward thinking retaliation tactics are all part of our current reality.

I’m hanging in there but the Effing Fours are not for the Faint hearted (see what I did there?).

Are you Fighting the F*&#ng Fours too, Friend?

The Fabulous Fours »
« 7-Year-Old Girl Sent Home From School For Having Wrong Hairstyle. My Frizz and I Go Into Hiding.

37 thoughts on “How Life With 4-Year-Old is Just Like Being in The Mob. I Would Imagine.”