A new parenting low.  I take momentary solace in my ability to detach myself from this insanity by conjuring up some words for my next post, the Mourning Sleep one I’ve been trying to grow from the infertile soil that is my sleep deprived brain. Rock bottom, I tell myself. From an aerial view it would probably look almost caricature-esque. Half of my body is inside One Year Old’s crib. My torso is stretched blocking the opening left by two missing bars we’ve decided to remove as he was getting dangerously close to one of his latest resolutions, namely “climbing over this is SO happening”. We’ve removed the bars to show him a different way of getting out, which he quickly mastered and took to the next level in a typical One Year Old move by banging on his door at all hours of the night. It’s like the taste of nocturnal freedom knocked out his ability to fall back asleep. Intoxicated with the lack of physical boundaries he keeps running to the door and banging on it with his mighty little fists.

Next door is Four Year Old. He, too, actively communicates with us at night. He, too, does so by knocking, but he is driven by a polarly opposite sentiment. From his hiding place under the blanket he reaches out only his arm, exposing as little of it as possible to the menacing night and knocks considerately, one-two-three times per round. One-two-three, increasing only the speed if it doesn’t work right away. One-two-three until we hear him. Anything to prevent him from making his way on his own through that zombie ridden corridor and into our bedroom and bed ever again. Thankfully they don’t usually knock at the same time, so I do the ping pong* from One Year Old to Four Year Old’s room or vice versa almost every single night.

Back to that aerial view. I’m sure you’ve noticed a determined baby trying to climb over me. His growing zeal and glee in doing so are in direct correlation to my growing frustration. It’s 3am and I’ve been here for two hours, trying to stop him from getting off the bed and running in circles around the room. That’s just slightly longer than I’ve spent here yesterday. You can’t see this from aerial view, but tears of desperation just started running down my cheeks. If you’ve happened to notice and view them your aerial reasoning would be “Well duh, this is a bad scene and she finally snapped”. You would have to really zoom in on me and keep going until there’s a clear close up of my ear and then keep going some more until everything’s kind of blurry and you might pick up on my thoughts and realize that I was crying and the actual reason why.

It’s that freaking second time new parents mantra. I’ve used it myself. “Good thing we know that this is all temporary, right?” we often tell each other. And while I’ve been playing along, nodding to that, not wanting to be a downer, I’ve recently caught myself thinking “Really? Will I really EVER sleep again?”After all it seems like there’s been so much more no-sleeping in the last four and a half years than sleeping and it’s just the reason why that keeps changing. I think of these brutally honest photographs of me that Four Year Old took in the car and under the skylight. Here, zoom in on my eyes, you’ll know what I’m talking about right away. 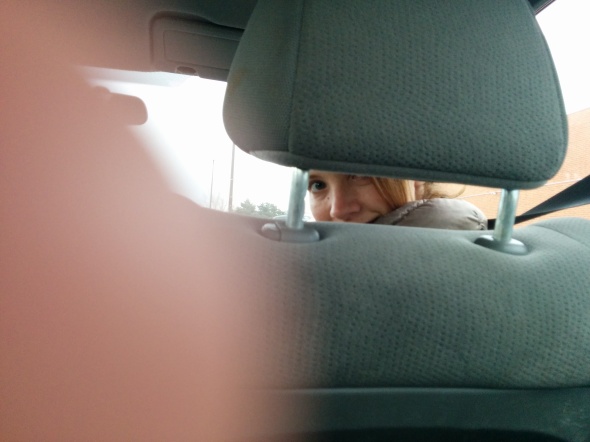 My sleep is a joke. Go to an archaeological dig site and dig up a shattered Greek amphora. My sleep is more fragmented than that.

Give me that aerial view again.

Can you see the kitchen?

We’ve already been to the fridge downstairs a few times to get more milk and the house looks like a Dexter crime scene meets white picket fence. The signs of my struggle for sanity are everywhere and they manifest themselves in something that is the very opposite of sane. Scattered on the floor are a few tomatoes and one peeled onion which fell out of the fridge in one of my somnabulistic attempts to reach for the milk carton. On the counter lies a pacifier that I’ve been desperately trying to impose upon my son who has hardly ever used one in sixteen months. Everything reeks of desperation.

I know it’s the exhaustion of having spent three weeks locked up at home with them during snow storms, holidays and viruses that’s making me react that way. I know that One Year Old won’t always be making such bad decisions, which all have just one potential end result – head injury. I know that when that happens, I won’t be as exhausted. I know that what keeps them up and wakes them up so bright and early is their specialness, their unique spark, their incredibly active and bright little brains. The guilty, scared, superstitious mommy conscience part of me immediately spits three times and thinks, If this is the price I have to pay for these particular two then hell yeah, let’s rock this sleep deprivation ping pong thing, but why do we so readily accept these either/or mental constructions? How great would it be if I could only zoom out, really really far and wide into six months from now and everyone was in their own beds sleeping. Peacefully.

Are you obsessed with sleep? Are you tortured by sleep deprivation or have you learned to not let it get the best out of you?

** Ping pong – TGFF. Thank God for friends, their presence and support during periods of stress. My friend and neighbour, Rebecca, came up with the term “ping pong” to describe her children’s wake-up patterns.

Thank you my friend, Deb, at Urban Moo Cow (check her out, I consider her a kindred spirit) for encouraging me to write this post.

NASA Will Pay You 18K For 70 Days In Bed – In Related News: Who Wants To Watch My Kids? »
« Lovingly Dedicated to my Sanity Assassins