There’s some gratefulness that’s been brewing in me for a while and this morning’s Twitter prompt from my friend Lizzi gave it a form.

#TToT 36 Where did all the words go? Got yours? BRING THEM! http://t.co/LrTvrbBUOG @cyndi_calhoun @KatiaDBE @SouthMainMuse

This photograph represents a few things I never thought would happen:

I never thought I’d read The Power by Rhonda Byrne to begin with. I mean if so many people think it’s good then it must be crap, right? When I started reading the book which was gifted to me, I never thought I’d get inspired enough to overcome one of my childhood’s most sacred thou shall not’s and give the book dog ears, because I HAD to be able to come back to these specific pages and reread them.

The book speaks of the Law of Attraction which I’ve been trying to practice in sporadic frenzies whenever the need arises. In very basic terms the law of attraction is the belief that by thinking positive you will attract positive and vice versa. According to Byrne gratefulness is the greatest multiplier of good in life.

Two weeks ago I watched this inspiring vlog by my very talented writer friend, Sarah, at Left Brain Buddha. In this post she walks the viewer through her own private vision board. One of many thing that struck me had to do with incorporation of the Huffington Post logo onto the board. Sarah wanted to write for them and submitted some of her posts. The online publication got back to her a few days after she added their logo to her vision board. That to me was a classical manifestation of the ways of the law of attraction.

It made me think of the history lesson I gave Four Year Old. We talked about the Lascaux cave paintings and the book presented a theory according to which the famous animal representations were a form of magic, whereby the ancients were depicting their prey in order to summon it. Were they among the first ones to understand and practice the law of attraction then? 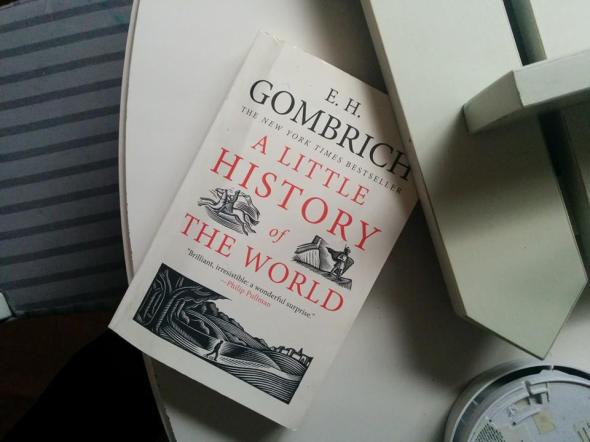 Sarah’s post made me want to redo my own vision board. Among the things you’ll find on it is an image of a pair of mittens. These mittens represent freedom of choice, respect and self reliance. They’re a reminder for me to practice these values with my kids. Why? You’ll just have to read this one of a kind post by another very talented friend of mine, Jane, at Nothing by the Book.

So I’ve been in a grateful mood. Mostly. More than usual, anyway. Completely overwhelmed, sleep-deprived much, but grateful. Because of:

2. 18 Month Old’s whisper this morning. He was repeating “Baba, baba!” as we approached a meaningful location in the house, the kitchen with its stairs leading down to the basement where his babooshka (my mom) lived two weeks ago when she visited us.

3. The teenage boy who startled me when he approached from behind as I was pushing 18 Month Old’s stroller through this, in a rush to pick up Four Year Old, with the words “here, I’ll get it” pushing a giant trash can out of my way.

4. Cheese. The cheese and wine evening a few weeks ago at my friend Cheryl’s house reignited the love of cheese in me. This one tastes like apple pie she told me, and it does.

5. Four Year Old’s soul and the way it repeatedly melts and squeezes mine. This week as he watched Honey I Shrunk the Kids he became extremely emotionally invested in the battle between the shrunken kids, the movie protagonists, and a giant scorpion, attacking them. The scorpion was chased away. Four Year Old burst into tears lamenting the scorpion’s imminent (in his opinion) fate of being eaten by a whale. His ability to empathize with all fills me with both pride and concern.

6. 18 Month Old’s mantra to put himself back to sleep at night being “mama, mama, mama”.

7. The conversation that started with a “Mama, I have no more friends in my class” spoken from the depths of underneath the blanket, continued with a heart to heart where I explained that the fact his friend has another friend now doesn’t mean he doesn’t like HIM anymore, and that when I was a little girl I had two girlfriends and there was enough room in my heart for both, and him telling me that his friend has no room for him in his heart and in fact he took out Four Year Old’s picture and removed it from his heart – that conversation ended with a random mention of playing Invisible Evil Diaper with a Knife with both said friends the same day.

8. That the six week Robotics after hours project that Thirty Seven Year Old was involved in is over and even the fact that I posted this last Saturday eve on Facebook with the status:

So, uhm, we’re testing robots. How is your Saturday eve?

10. This face. This is the face of a man who was a concentration camp prisoner during WWII. Look at his facial expression. His name is Victor Frankl and I’m reading his fascinating book Man’s Search for Meaning right now.

What are you grateful for right now?

A Fly on our (Chicken Coop) Wall, Considerings, Finding Ninee, Getting Literal, I Want Backsies, Mother of Imperfection, Rewritten, Thankful Me, The Meaning of Me, The Wakefield Doctrine
Advertisement

Babooshka »
« The Hidden Talents You Won’t Find on my Resume