Dear Mom Unintentionally Consoling Me For Having Boys. Thank You, But I’m OK.

Since giving birth to my first son, Five Year Old, I couldn’t help but notice the diplomatically suppressed glimmer of hope in the eyes of friends, random acquaintances and people I’d met on the bus whenever our so-what-do-you-have conversation died down and they surmised: well, the next one will be a girl then! The funny thing is that I wasn’t looking for reassurance. I didn’t feel like there had to be a girl in order for me to feel happy. Or maybe accomplished or fulfilled was the adjective they had in mind. I wasn’t just totally fine, I was head over heels and in no need whatsoever of consolation. I knew, of course, that they were driven by pure kindness, wishing upon me what had felt to them like the greatest possible joy to be experienced in this life and I was touched.

And then I went ahead and got pregnant again and now I had not one but two of those and it became evident and even harder for various well-wishers to ignore the fact that I’m STILL not having any girls. A hint of doubt made its way into the now more definitive “next one’s a girl!” statements. I STILL couldn’t see what was so wrong with my current situation but smiled and politely agreed. 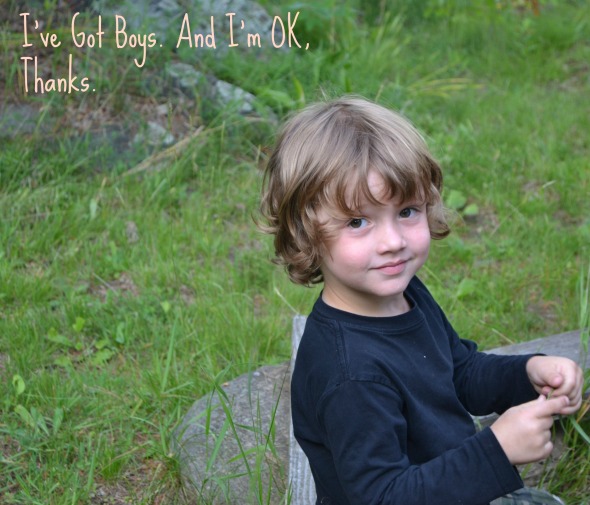 Don’t ask me how, but from very early on I knew I would have two boys. As strange as it may sound coming from someone who took great pleasure in some “by the book” girlie activities such as shopping, conducting in depth research of Vogue magazines and giving my Barbies makeovers right before throwing them off an imaginary cliff in a purely girlish dramatic gesture, I never fantasized about having a girl. No, there was no fantasizing, dreaming or indulging in “what ifs” neither before nor after having my sons.

Please believe me when I say this, it’s not that I’m ANTI girls. I adore children and they generally love me back. I would have been just as happy and fulfilled as a mother of girls, it’s just that I don’t feel robbed.

Yet recently I’ve had some – what exactly do I call them? – moments. Feels evoked by a floral gift bag and a pale pink strawberry patterned raincoat.

I noticed her last week in the far corner of the school yard. A tornado of five year old boys, including my own, had just raged through the area leaving a couple of unnoticed preschool victims behind. One of them was her. Standing there in a pale pink strawberry patterned raincoat, with her friend but alone, crying silent tears, clutching her matching strawberry print umbrella. I walked up to her and asked what was wrong. She lifted her heart shaped face, tears streaming from the corners of her eyes and said a reallylongsentencewhichwasn’tpunctuatedwithanycommasandwaskindofhardtofollow.

I told her to come and sit on the bench with me.

The boys bumped into her and knocked her off her feet. She fell and scraped her knee. Her friend knows there are band aids in the classrooms. They both understand that they should tell their teacher what had happened so she can put a band aid on the bruise the little girl is now pointing at. It’s hidden behind a pair of thick white wool stockings with hearts of all colours of the rainbow.

And I am feeling that familiar warmth.

Exactly one year ago, I read a beautiful post by a mother of three boys, Emily at Oh Boy, Mom. One sentence haunts me still: I don’t want a girl, I want a daughter. Much like myself Emily spoke of being completely happy and fulfilled as an all boy mom. She never dreamed of a different outcome but she too had a moment. Hers was represented by wishing for someone who would brush her hair. Mine was the fragility that is a little girl in a strawberry patterned raincoat and a matching umbrella and it was her who had set me off on a brief Sliding Doors type trail of thought.

Would I have been a different parent as an all girl mom? Would I have been better, more patient had I not dedicated such huge portions of my day to exploring the verbs: chase, catch, stop, prevent, save? Maybe, but then I wouldn’t have gotten to see my five-year-old’s shy smile when we were playing Dungeons and Dragons tonight and I was the thief who asked for his identity. The shyness in his smile which is there to mask another emotion, a more shameful one perhaps, pride. Pride in the fact that he is actually a brave Jedi on his way to rescue a princess from the evil king Morgadon as I’m about to discover in a second when he will tell me “I’m. A Jedi.” and avert his eyes.

Please visit our lovely hosts, some of the best writers out there:

Stephanie at Mommy, For Real

I Wrote a Review About Medieval Times and Made it all About Myself. And Moms. And The Bachelor. »
« And Don’t Forget to Act Out, My Love

94 thoughts on “Dear Mom Unintentionally Consoling Me For Having Boys. Thank You, But I’m OK.”