Some Truths About Lies 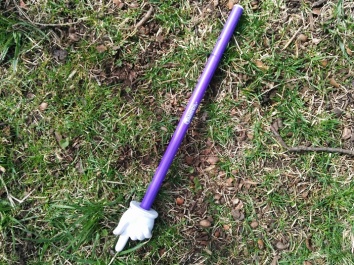 When I studied Art History I first became exposed to the term “provenance”. Provenance in Art is like the CV of an art work. It documents its movements, relocations and history of ownership, since it left the artist’s studio and made its way to the wall of the museum or the private collection that it’s now part of. Toys have a similar tendency to migrate but their provenance is usually undocumented and sometimes even unknown. I have no idea how, when and under which circumstances the pointy finger showed up at our household. I also had no idea that my five-year-old could lie so fluidly and with such ease when upon unearthing the object, which was naturally lying on what will be our backyard grass once spring finally commits, he explained to two of our neighbours:

“This is a pointy finger, and my mom uses it when she talks to me. or when she wants to teach me a lesson”.*

A couple of weeks ago I interviewed for a job and found myself in a dilemma. To better my chances of getting the job, I’d have to not tell the truth. And I mean actively not tell it, like maybe even say something which definitely wasn’t the truth. Job interviews are, by definition, extended sales pitches and as such they invite you to put a positive spin, put your best foot forward and a variety of other euphemisms – you decide for what. Interview You is like First Date You and Facebook You. Does the persona channelled in the latter two not exist? Sure does. Does that persona represent “You” in its entirety? Probably not. Is there a difference between presenting a selected fragment of you and lying? Slight. The definitions of “truth” and “lie” become less rigid on job interviews and first dates and like most other things in life there are fifty shades to them.

Our kids can sense that.** 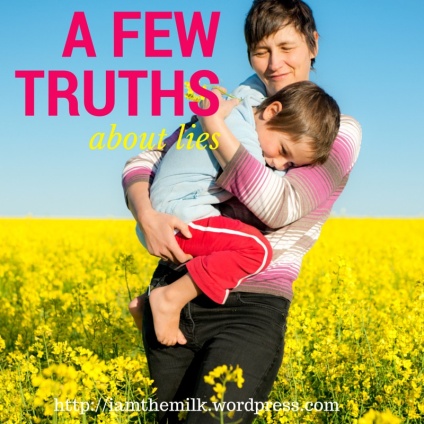 The most dangerous lies are the ones that we believe in and perpetuate. Lies about ourselves as people. Lies about what we’re supposed to be like – a “standard” that we’re supposed to conform to – as women, as mothers. Unintentional lies fed by deliberate agendas, innocent traditions, archaic myths or simply the lack of thought or compassion of others. One year ago I read Avital Norman Nathman’s anthology The Good Mother Myth. A must read for all moms, this book offers an alternative to the photo-shopped mother image that we’ve all encountered through various walks of life: media, stories and assumptions we make based on real life observation. The alternative that emerges is the mother who makes mistakes, who doesn’t always know what she’s doing, who doesn’t always enjoy it, who doesn’t always ace this gig, who isn’t always a Role Model but most definitely is a Real Model.

I want to acknowledge you, the mom who’s reading this and beating herself up because she hasn’t done enough. If you’re capable of beating yourself up, if you question your actions and wish you did better, then you’re most likely doing more than enough.

* It’s possible that he said “when mom yells at me”.

*** This post was a Netflix Stream Team post on the topic of “liars” and it just so happens that my favourite recent Netflix original is about one very skilled liar. Find my little list of favourite Netflix liars here:

6 thoughts on “Some Truths About Lies”