9 Ways to Tell Your Toddler is a Second Child

Empirical studies conducted by me show that toddlers with an older sibling are 100% more likely to use the expression “buttface” before they turn three. And while not all households house an older sibling who is as committed to the use of the term as mine, there are other revealing tells to help you gauge whether a toddler is really that far ahead of the curve or simply is a second child. 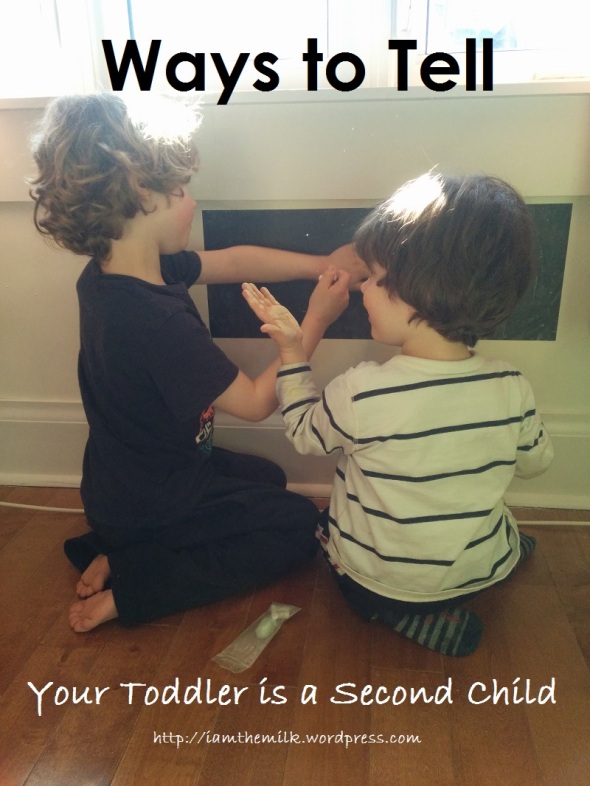 When a toddler is a second child:

Alternatively they might be the toddler glued to the glass, longingly staring at the skaters on the ice rink. Either way they’re convinced that it’s all about them. Whether they’ve been brought here to suffer as the victims of a cruel joke or to practice their own soccer skills (soccer being that game where you lift the ball up with both hands then toss it way up in the air and try to avoid it hitting your head)  it’s all. About. Them.

They’re the toddler who talks zombies

“Goodbye, Ethel, go back into your house and don’t let the zombie catch you!” my toddler considerately warned our ninety year-old neighbour the other day. She couldn’t heed the warning as she didn’t hear it, but the premature exposure to zombies sure makes for some cringe worthy moments.

Want a glimpse into the evolution of the pop culture scene in the last decade or so? Raid a second child’s costume wardrobe. To add insult to injury the costumes you’ll find will probably also display some wear and tear and at least a couple of non-removable chocolate stains.

Speaking of chocolate, they’re that toddler who knows about it. They’re also familiar with lollipops and juice

And they’re probably corrupting other toddlers around them.

That being said, it’s possible that they’re the ones with the more advanced dental hygiene practices

They’ve been exposed to mint flavoured toothpastes and the likes, after all, and some of them are very open to experimenting with them.

Because if all of their six year-old friends are doing it, why shouldn’t they?

They’re the toddler laughing louder than anyone else in the room, because what the heck (an expression they use, of course) did the pink panther just do and why was it funny and let me just blend in with the crowd.

Because they’re the baby and God forbid we upset the baby.