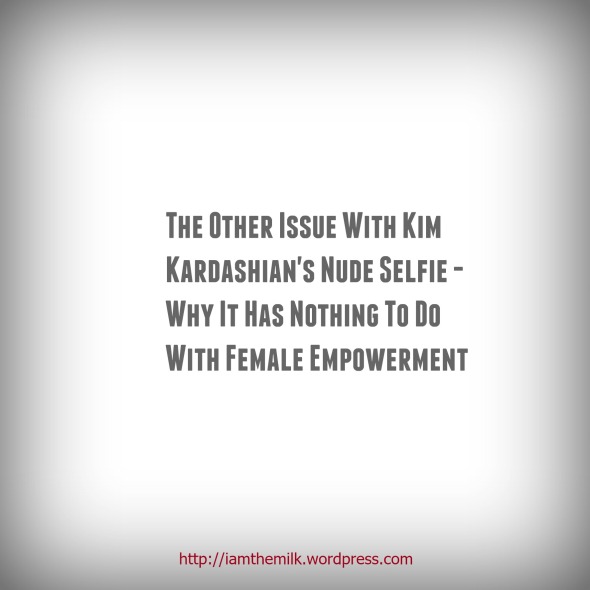 What I absolutely detest about the photo has nothing to do with the image itself. It’s more about the pairing of it with the caption “when you’re like I have nothing to wear, LOL” and the lack of awareness (self and public) embodied in this act. Unlike the empowered adult woman KK paints herself to be in the ensuing rhetoric (through Twitter, of course) the caption is a cop-out, cutesy humble brag of sorts. Clearly KK wants you to admire her body, and why shouldn’t she, but instead of just saying so like a grownup she chooses to kid around about clothing and adds the obligatory LOL to drive the joke home.

Now let’s talk about LOL for a minute. My six year-old has recently learned to use the expression “no offense”. He’s been known to pair it up with incredibly offensive statements and thinks that the mere addition of the words at the end of a sentence cancels out its potential negative emotional impact. Some people use LOL similarly. Put an LOL at the end of a controversial situation et voila you’ve annihilated it! Because LOL!  If you are indeed proud of your body and wish to use it as a means of empowering other women why post a cutesy message like “when you’re like I have nothing to wear, LOL” instead of saying something more relevant to the subject in the accompanying message? Or was the joke about having nothing to wear “IT”? Was there a hidden social commentary or critique there, something to do with our constant preoccupation with clothing as a defining trait of women, and if so is that empowering and how? Or was the mere fact of taking your clothes off (and the implied – by choice) an act of empowerment? If so – how? Because YOU did this? Because nobody else told you to? Because as women we’ve come to expect that the norm is to be put in situations where somebody else might tell us to or expect us to take our clothes off? I am SO confused!

Don’t get me wrong, I am not saying that a nude selfie of a female has no right of existing on the internet unless it’s “legitimized” by a fake RAH-RAH FEMALE EMPOWERMENT rhetoric. I don’t believe for a second that KK was posting the photo as a means of empowering herself or other women since as we’ve established there is nothing to speak to that effect, but I still believe in her right to post a photograph like that without any ideological “justification”. Just because she felt like it is a good enough reason in my book. She might have been thinking “DAMMIT, I’m looking HOT and I don’t want to turn ninety and realize that I never shared this moment with the world!” (a principle which seems to govern a lot of KK’s online decisions) . But if that’s the case, then OWN IT. Like a mature, empowered female. If it talks like an empowered female it should also walk, tweet or Instagram like one – to put it in social media palatable terms. The dichotomy here points to either a lack of sincerity or self awareness.

The worst thing about the caption is its lack of sensitivity and awareness of the unwritten responsibilities a public figure’s status entails. To be a Kardashian is to have, by definition. If you’ve got a sense of humour then by all means share it with the world – it’s no less important than your butt and boobs. But as Chloe Grace Moretz and Pink pointed out in their critique think about WHO you’re sharing it with (my “IT” being the joke, as opposed to the boobs and butt they were referring to). There are people out there who genuinely DON’T HAVE, people who don’t have by definition, and they might find a joke about not having made by a millionaire (married to a millionaire, fathered by a millionaire) as she stands on the marble floor of her bathroom to be in poor taste. Launching below-the- belt-attacks on those who criticize you (Bette Midler’s age and Chloe Moretz’s celebrity status) driven, it seems, by the sole fact that you were criticized reeks of entitlement rather than empowerment. The act of empowerment assumes holding other people’s interests in mind and working toward promoting others none of which is reflected in the selfie and the ensuing shit storm.