The Things You Don’t Know 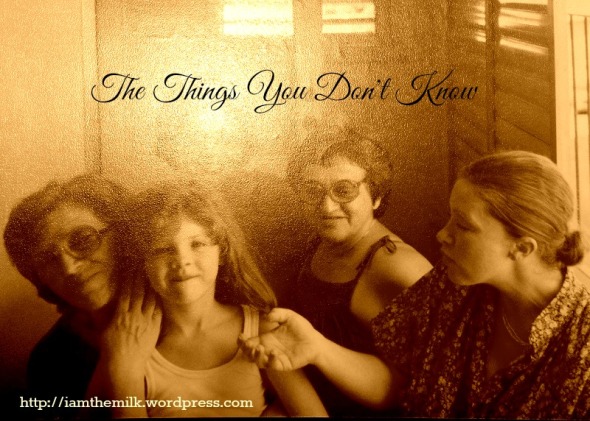 This morning I was enjoying my Earl Grey tea and kept the teabag in the cup instead of dipping it twice before quickly removing it as soon as the boiling water redefined itself as tea, and it occurred to me that you don’t know.  This is how I drink it now.

You didn’t really get to know me as a mom. You never observed me in my new habitat, my new country, my neighbourhood or my house, but unintentionally you carved your place here in this unvisited unknown. You are present in conversation as Baba Nina, a name we never used for you when you were around (It’s a strange thing how we keep updating the biographies of the deceased with new details). There are so many layers of distance between you and that name brought up in conversation in English between a golden-curled boy and his mom, whom you probably still perceive as a child, and yet you’re there, wearing a slightly different hat. Maybe it’s a baseball cap like the ones you started wearing all of a sudden in your mid eighties. And sometimes your presence isn’t diluted by a foreign name, language and circumstances. You announce yourself in a way that no one as humble as you would ever do in real life and in exactly the same way someone as passionate as you would often unintentionally do when delving into an argument about politics, the Soviet Union or theater. You announce yourself categorically when that boy who looks nothing like you, pushes his jaw forward as he withdraws into deep concentration. You’re present in other people too. I’ve mentally paired you up with a couple of neighbours you would never be able to carry a conversation with (you didn’t speak English, or at least that was what we said about you, applying our limited, muggle, inside-the-box as we lovingly joked about your travels to England where you spent your evenings watching plays and musicals while attending those theater conferences as Doctor Nina Mikhoels von Israel during the day). They are ageless, the neighbours, just like you, and they usually wear white sneakers with socks and carry backpacks as they march down the street – a couple on a mission. Their expression is purposeful but it never says “grocery shopping en route” instead the purpose has a clear artistic endeavour undertone to it. I suspect that that grimace doesn’t change even when their destination is, in fact, the grocery store. This is why I paired you up.

In some of our last conversations you insisted that I should keep writing, even though I never thought of abandoning it. You recruited the last reserves of passion left in you discussing it with me in a weakened voice that you apologized for. I think you would probably feel proud knowing that some of my essays ended up in books. Maybe you would keep a copy to yourself on your bookshelf because you know you can read and understand English. What you don’t know is that some of your books now live on my shelf. I can almost hear your exclamation maybe accompanied by a little handclap at learning that Sholem Aleichem and Tradition and Revolution: The Jewish Renaissance in Russian Avant Garde Art live next to two copies of your sister’s book about your father on my bookshelf, in my home, in my neighbourhood, in Canada, where you’ve never been.

I have two trees. We never talked about it but I think that maybe that would evoke some feeling in you. You would pause momentarily and then offer words of wisdom or humour. Come to think of it, it would probably be a proverb. I can’t say that you were a “green thumb” type of person (it’s very possible that a passion for art allows no room for that) but you were a rescuer and a non-giver-upper. I remember the presence of plants in your apartment, but they had no rhyme or reason. I envision (or remember?) a single stem with its roots exposed in a jar full of water, or three sparse stems in a pot plant far too big hanging in a macramé basket presenting itself to those who don’t know you as a sort of an experiment in plant growth but reminding those who do of your caretaking tendencies and rescuer side. The plants in your apartment were most likely an act of rescue, just like most of the furniture and all of the cats.

There were always cats, never less than two, sometimes even three. The last two were black, rescued from the street. Do I need to tell you that they’re taken care of, or do you know everything now? Do you know that your niece and replacement for biological child, my mom, is here in Canada with us? I know that makes up for all the hardship you went through in the end. Sometimes I feel like you orchestrated the whole thing with you and babooshka passing away within three weeks of each other just to make room for a new life for mom. This is something I would ask you about and you’d laugh and say something lighthearted on the importance of leaving on time and we would both chuckle, you paying a tribute to humour in life and art, and me enjoying the privilege of laughing with you, a rare breed who embraces the idea behind laughing without losing the ability to laugh genuinely.

I’m still me but I’m different and so are you in your Baba Nina version.  It’s sad that we’re moving forward without you and that there is so much you don’t know, but it’s the kind of sad I can live with.  What’s sadder is that I never told you how much I loved laughing with you, or did you know?

My great aunt would have turned ninety one today. Is there a special someone in your life that you’re missing?

7 thoughts on “The Things You Don’t Know”