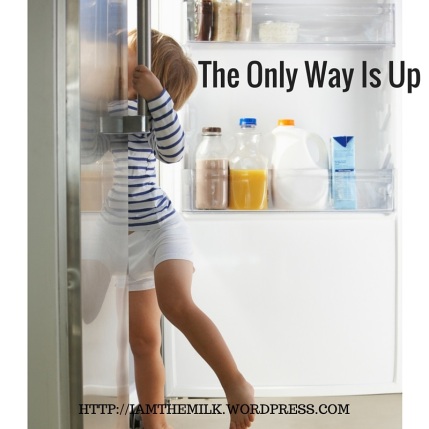 A while back I was browsing one of those ‘100 Facts About Archaeology’ books with my kids and came across a picture that hit an inactive spot in me — my childhood imagination – and ignited it because it represented a reality that seemed almost too fantastic to fathom. The picture showed a fragment of a neighbourhood so densely populated with white two-storey houses that you couldn’t see the street for buildings. What was strange was that the scene was still bustling with life with the street action simply relocating itself to the rooftops, which had doors in them. Naturally.

Last week, as I was assigning yet another strawberry toothpaste tube to temporary exile on the top kitchen shelf, away from my toddler’s greedy, squeezing hands, I was reminded of the  alternative lifestyle I was briefly exposed to and realized that I’ve been unknowingly yet actively partaking in this anarchy, with my own life’s gravity center shifting upwards.

When the epiphany started wearing off and winged cherubs fluttered away from my kitchen, grabbing a jar of Nutella and a recorder off the top of the fridge on their way out, I sat down (on a piece of Lego and some mushy Cheerios) to analyze this newly formed trend. I’d like to tell you that I meditated on the subject for a while, but before I could even say “Ouch! Ew!” I got called into an important meeting concerning a broken pancake. What I realized later during some Me Time in the washroom is that what started as yet another form of childproofing took a life of its own and branched out into parent proofing territory.

As it turns out, the objects gracing the tops of our fridge, Billy bookshelves, proper grownup closets, CD racks (sorry, hipsters) and basically anything that is higher than something else, can be divided into a surprisingly wide array of categories. Those domestic object layers represent different outlooks on life at different stages of our parenting journey, from the optimistic “yes, we can (have nice things tucked away in the far top corner of the bedroom closet)!” to the “each man for himself” message embodied in a stray Nutella jar sitting on top of the fridge. Various important aspects of our life such as survival (via food intake facilitated by knives), hygiene and personal grooming (shaving aids, toothbrushes, fill in the blanks) and the sense of identity and belonging to family lineage (personal documents, prized jewelry, nostalgic memorabilia) were all outsourced to top shelves for fear of being subjected to hands on treatment by a toddler and a six year-old.

In order to maintain the intactness of emotionally valuable food and family heirloom, I’ve developed some manoeuvres that would make a mediocre magician proud-ish: from sensory trickery achieved through the juggling and shuffling out of reach (and upwards) of various forms of sugar to more advanced illusory tricks like the dropping of a kitchen towel on top of the ipad and pretending it’s gone to applying the distraction method as you toss your grandmother’s emerald stone necklace in the air hoping it would land on the top shelf and push your kid out of the kitchen under the pretense that you think you saw Brobee from Yo Gabba Gabba playing outside.

Up has worked for us, at least for a while, but I’m starting to see the first cracks in our strategy – chairs. It may not be long until we’re forced to come up with a new one. Like other phenomena in the lives of parents, this too shall probably pass and we’ll look back (up?) to those days and reminisce about how easy we had it back then, in the horizontally challenged days.

Happy New Year. I love you, readers. If you’ve been a silent reader I want to thank you for reading and agreeing or disagreeing. Some days I’ll check my stats and I’ll find a click through another blog who put me on their favourite list. I want to thank you for that and let you know that I often feel like I’m disappointing you by not writing much. I’m still trying to find the elusive balance between full time work, writing and parenting. Let me know if you have advice or just stop by and say hi.

If your kids are not all holidayed out (and if you watch the movies first and approve) I recommend watching Happy Holidays from Madagascar, How the Grinch Stole Christmas or The Nightmare Before Christmas. Some of the non holiday related shows my kids have recently enjoyed are The Dawn of the Croods and Puss in Boots.

As for us we just finished watching Sense 8. What show should we watch next on Netflix?

And what about you? Is life looking up?

I’ve Created a Toddler »
« The Bedtime Struggle is Real